From the symbolic and actual value of the land it is born an intervention that emphasises the community sense of the threshing-floor [eira]. Its aggregating character – that brings the community together around an activity of common interest – is revisited by providing it with the skills that allow it to remain current and active. An experiential installation is set trough the idea of a ceiling [tecto]: due to its unifying character, this architectonic element proves to be pertinent in shaping of a will of togetherness and involvement on a common space.
On the other hand, it was meant to face the land as a naturally productive element: it has provided food, subsistence; it provides references, connections, acknowledgments – it provides identity.
The intervention was built under these premises. With minimal contact with the ground, the supporting structure was based on generic, easy to find and multipurpose elements: two scaffolding lines, neutral, sustained multiple layers of a permeable and always alive covering. The focus was set on this space in between ground and ceiling, that is, in the spatial situations it creates – by creating a ceiling, we have come to own a floor.
The direction of the installation – perpendicularly to the stage, creating dynamic views – assures a visual permeability that emphasizes, already from the street, the relation to the music concerts. In that way, unifying lines were created between all the elements that shape the venue – a square was made. In its turn, the introduced volumetric variations provide this space with particular and remarkable experiences. Complementary scenarios are added to the area by the stage; the area between stage and installation, united by the natural olive tree colonnade, embodies the urban configuration of the Cem Soldos village.
The interventions main element and work matter is the potato bag. A common, primitive material is transferred from its everyday context to an artistic, interventional and critical sphere.
Through the plastic properties it provides – lightness, colour, shine, transparency – the symbolic pertinence of the land is raised to an upper stage: it is a popular party ribbon and a flag, without ceasing to be a potato bag. 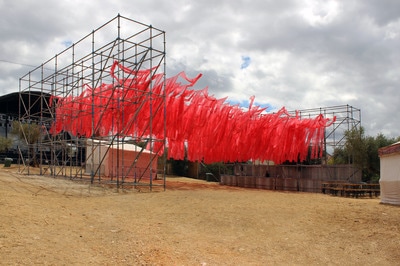 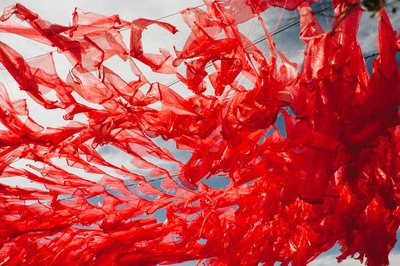 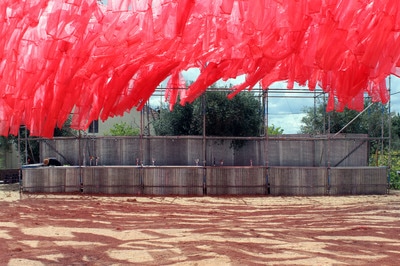 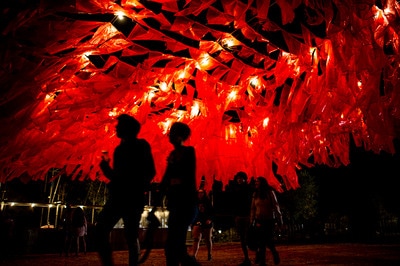 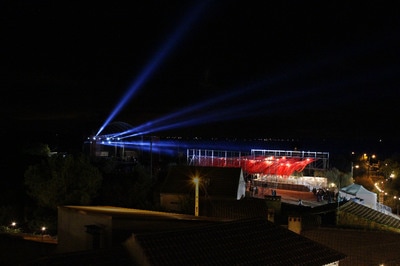